The Genius of Neil Young

This Class Has Been Cancelled!

Neil Young is one of the most influential songwriters and guitarists of his generation, known for recording such favorites as ‘Old Man,’ ‘Harvest Moon’ and ‘Heart of Gold.’  Born in Canada in 1945, Neil Young arrived in the U.S. in the mid-1960s and co-founded the band Buffalo Springfield. He earned fame both as a member of Crosby, Stills, Nash & Young (CSN&Y) and as a solo artist, writing and recording such timeless songs as “Hey Hey, My My (Into the Black),” “Rockin’ in the Free World” and “Heart of Gold”—a No. 1 hit.

Nicknamed the “Godfather of Grunge” for his undeniable influence on that genre, Young is also a strong advocate for environmental and disability issues.  Young in his youth suffered from epilepsy, Type 1 diabetes and polio.  By 1951 his health had deteriorated so far that he was unable to walk.

As his health recovered in the 1960’s Neil began making the rounds on the Canadian folk circuit, rubbing elbows with other up-and-coming Canadian musicians, including fellow folk singer Joni Mitchell and the rock band the Guess Who.   In Los Angeles in 1966, Young ran into Stephen Stills and soon thereafter, Young, Stills, Palmer Ritchie Furay and Dewey Martin formed Buffalo Springfield.   They debut self-titled album including the hit “For What It’s Worth” became a Top 10 hit.  In 1968 a strain inside Buffalo Springfield led him to strike out on his own.

In 1969 Young signed with Reprise Records1969 and released his self-titled debut album to mixed reviews.  But Young followed up just a few months later with Everybody Knows This Is Nowhere, a signature album, on which drummer Ralph Molina, bass player Billy Talbot and guitarist Dan Whitten, collectively known as Crazy Horse, backed him up. With their raw sound serving as the counterpoint to Young’s distinctively melancholy and untrained voice on such tracks as “Cinnamon Girl” and “Down by the River,” the album climbed up the charts to No. 34, and eventually went gold.

Meanwhile, Young had reconnected with Stephen Stills, who had formed a new group with David Crosby of the Byrds and Graham Nash of the Hollies. Young joined the trio, which was renamed Crosby, Still, Nash & Young and they began to perform and record, playing the legendary Woodstock Festival in August 1969 (This was CSNY’s second performance ever—Young would not allow himself to be filmed for the movie). The band’s subsequent tour and album release, 1970’s Déjà Vu, catapulted them to fame—so much so that they were at times referred to as the “American Beatles.” However, Young’s relationship with his bandmates quickly became contentious, and he left the group to focus more exclusively on his solo work.

In 1970 his album After the Gold Rush broke into the Top 10 and featuring such Neil Young classics as “Only Love Can Break Your Heart,” “Tell Me Why” and “Southern Man.” (The latter, a condemnation of racism that angered many Southerners, would inspire Lynyrd Skynyrd’s “Sweet Home Alabama,” in which Neil Young is called out specifically.) Young outdid himself the next year with Harvest, a hallmark work that contains the songs “The Needle and the Damage Done,” and “Old Man”. At the end of 1972, Young and his girlfriend, Academy Award–winning actress Carrie Snodgress, had a son, Zeke, who was born with cerebral palsy, and Snodgress had to set aside her acting career to care for him. A few months later, shortly after being fired by Young before their upcoming tour, Crazy Horse guitarist Dan Whitten died of a drug overdose. These events were compounded by a string of relatively unsuccessful projects, including the 1972 film Journey Through the Past, the live album Time Fades Away and 1974’s On the Beach. Young and Snodgress split up in 1975, the same year that Young released his album Tonight’s the Night, which had been recorded shortly after Whitten’s death and reflected Young’s frame of mind with its dark character and themes, as well as Zuma, a hard-edged album featuring Crazy Horse’s new lineup

Things got even better the next year, when Comes a Time broke into the Top 10, and Young married Pegi Morton (who was waitress at a restaurant near his ranch and would inspire many of Young’s songs in the future, most notably, “Unknown Legend”) and embarked on a tour with Crazy Horse called “Rust Never Sleeps,” during which they showcased songs from an upcoming album. Released in 1979, Rust Never Sleeps echoed the structure of the concerts, alternating between quiet, acoustic tracks and aggressive electric numbers. Among its highlights is one of Neil Young’s best-known tracks, the anthem “Hey Hey, My My (Into the Black).”

“With Crazy Horse, it’s all one big, growing, smoldering sound, and I’m part of it It’s like gliding, or some sort of natural surfing.”

Neil Young is one of the most prolific recorders of music in the History of Rock and Roll with over 40 albums recorded since 1969.  Young was inducted into Rock and Roll Hall of Fame in 1995.    In our session at EmpowerU you will learn about Young’s different groups that he’s played with.   His complicated love-hate relationship with Crosby, Stills, Nash & Young.   The impact on Young of the death of Crazy Horse guitarist Dan Whitten.  The inspiration behind such hits as “Old Man” and “A Man Needs a Maid”.  His contributions to the Benefit for Farm Aid, his countless charitable efforts, and his ownership of Lionel Trains.    And the straw the finally broke the back of CSNY, David Crosby’s comments about Neil’s marriage to actress Daryl Hannah in 2018.

You will learn about Young’s incredible impact on Rock and Roll as we look as his music—through video and discussion– in a way that you will enjoy.   It’s going to be a loud night at EmpowerU –tell your music friends and don’t miss this one!   Come early around 6:15 pm and Daniel Regenold, the lead guitarist for the Vims will open up the night with a 45 minute set dedicated to Neil Young.   We will be serving draft beer, soft drinks and water at the event and feel free to bring beverages of your choice. 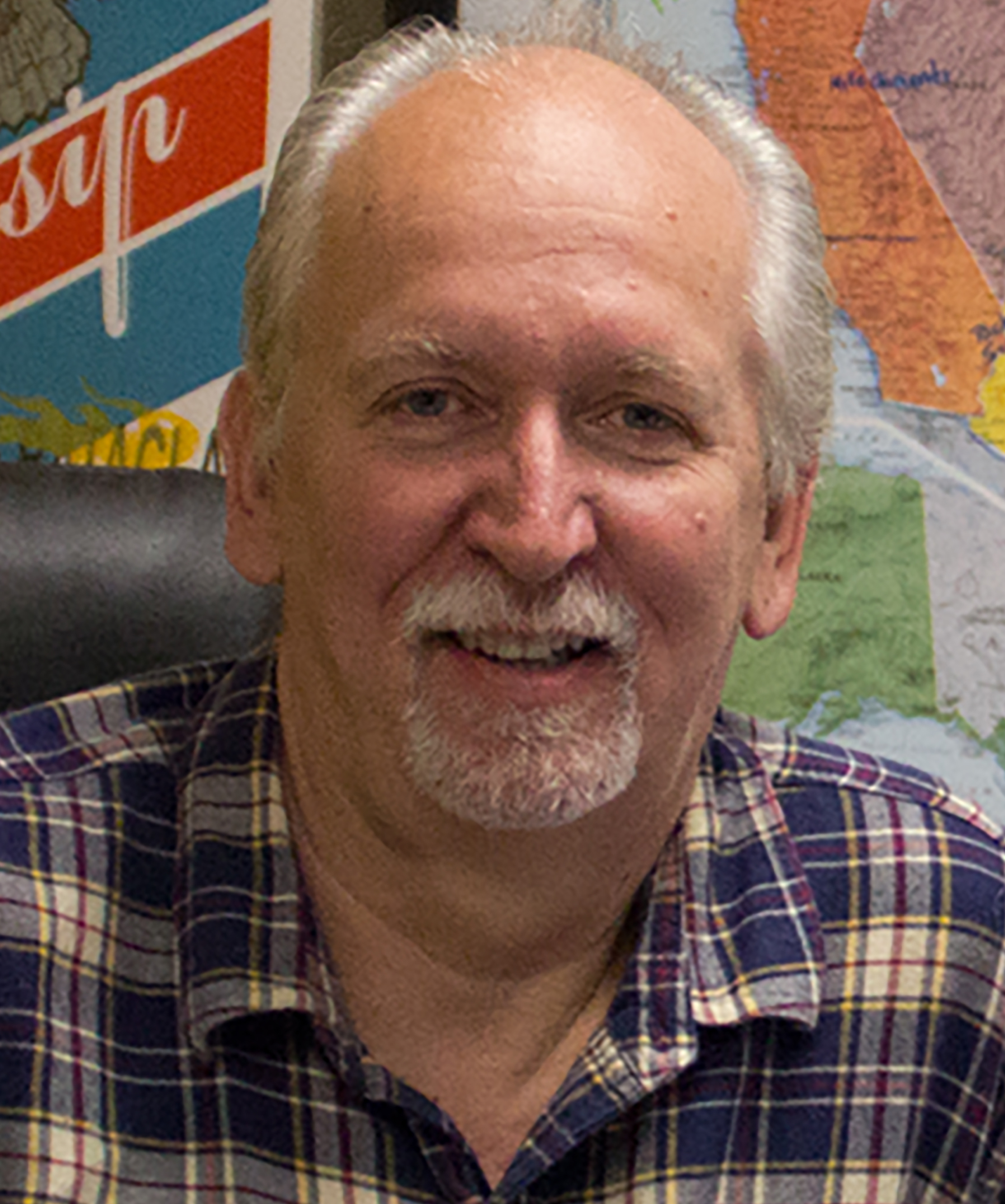 Dana was born January 28, 1953 in Shreveport, LA. His father was in the military and we moved many times in the early years.  They lived in Kansas, Missouri, Kentucky, North Carolina, and then finally in 1962 they settled in Falls Church, VA.  This is where music started to change his life forever.

Next door to him lived a boy who was much older than him, but despite the age difference they still became very good friends, initially through their love of sports.  This is where it happened.  He vividly remembers the boy’s record player in his living room and the day he pulled out this album with a huge wave on the front, with a surfer on his board.  It was the Beach Boys “Surfin’ U.S.A”.  The title cut opens the record, and that was it, he was hooked.  Then he showed him a record by someone named Chuck Berry titled “Chuck Berry is on Top”, and played the song “Johnny B. Goode”. He couldn’t believe my ears.  It was truly a magical moment.

The final piece of the puzzle fell in to place on February, 9, 1964 when the Beatles made their 1st appearance on Ed Sullivan.  Like so many others, this was a defining moment for him. From that day on, until today 50+ years later, music was the one constant in his life.  From elementary school through high school, college, marriage, children, grandchildren, and lifelong friends, music has been with him for the entire ride.

Starting with his 1st concert in the spring of 1969, with Led Zeppelin opening for The Who, and up until his last concert on May 6, 2017 in Tampa, FL when Joe Walsh opened for Tom Petty, he has been blessed.  But of the hundreds of bands and concerts he has seen, none brought him back again and again more than Tom Petty and the Heartbreakers.  Close behind, Neil Young who will be the focus of tonight’s class.   Dana had a long career in the record business with Penguin Feather Records in Virginia and served for 29 years as the President of Posterservice, Inc, a sister company of Frame USA.