The heart warming story of Samuel, and the mother who fought for his life to have meaning.

Do not miss this opportunity to hear a most amazing and heart rendering story from a mother who was determined to give her disabled son life, education, and opportunity.   Never under estimate the power of a ‘Mama Bear’.   Tera shares her journey that began when early testing showed her son, Samuel, had Downs Syndrome and her doctor advised her to terminate her pregnancy saying “if you do not you will be burdening your life, family and community.”  Those were fighting words to Tera and she has proved to be a Champion in the Ring! 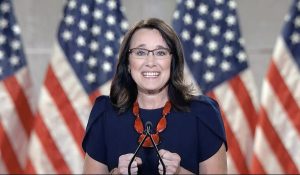 She believed “Her baby was a human being created by God and that made him worthy of life.” She not only had to fight the medical establishment but also the Teachers Union who thought it was a waste of time to give her son a good education. When she went to register Samuel for kindergarten she was told to just ‘put him where he would be comfortable, don’t stress him out by trying to teach him.’ When she pushed for him to attend his neighborhood school with his sisters, she was told to ‘just go home and let us do what we do.’ When she inquired about functional learning she was told ‘this is all you get, like it or not,’” Well, suffice to say, she did not like it!  So instead of giving up she responded by working to pass legislation in Ohio for a special needs scholarship giving access to the programs that meet their children’s needs.

Tara also worked to start a new functional learning program at her local private school. All of this did not go unnoticed and the Proud Mama Bear relates what happened due to her efforts.  President Trump invited her son to speak at the White House.  Tera said “President Trump did not dismiss my son; he showed Samuel he valued him and was proud of what he accomplished. He gave Samuel an equal seat at the table”. This is an exceptional and inspirational personal pilgrimage which clearly shows you should never underestimate ‘The Power of One’.   Tara will speak from 7:30-8:30 PM.

Barb will explain the separation of powers between the three branches of government as set out in the Constitution, and how the recent actions of Congress and the President appear aimed at destroying the power of the Supreme Court.  She will explain what codification is and how it works, and look into the legitimacy of executive orders.

Also to be discussed are recent actions of the Legislative and Executive branches to browbeat and dishonor the Supreme Court Justices in an attempt to override their independence in ruling on future governmental actions.   She is concerned that the true purpose here is to ultimately delegitimize the Constitution itself.   Barb will speak from 7:10-7:30 PM.

Tera Myers: Tera has over 27 years of experience working with individuals with disabilities. She has advocated for choice in education at the state and federal levels for the past 18 years. Her son Samuel is one of the first recipients of Ohio’s Jon Peterson Special Needs Scholarship, which she helped get passed in 2011. Upon passage of the bill, she partnered with a local private school to start and direct a special needs program. In December 2019, she and Samuel spoke at the White House for a Roundtable discussion on Education Freedom with the President of the United States.

Tera was a 2020 Republican National Convention speaker highlighting her family’s story and her work for Education Freedom. She is currently an Advisor for Families of Individuals with Special Needs with the American Federation for Children, based out of Washington, D.C. Tera’s passion is to help ensure that all students have access to an education that best meets their individual learning needs. Tera is the wife of Lewis, and the mother of Samuel, Lynsey, and Maggie.

Barb Horwitz: Barb was a member of the Butler County, Ohio, legal community for many years, serving first as a paralegal in two general practice firms, then as the bailiff for retired Common Pleas Judge Michael J. Sage, and finally as an attorney in a firm where she specialized in insurance litigation and consumer bankruptcy. She has continued her practice of insurance law and consumer bankruptcy in a partnership with her son Jonathan Horwitz at offices presently in Centerville, Ohio.

She resided for many years in Springfield Township, where she served as a president of the View Place Civic Association. In addition, she has volunteered in several political campaigns. She and her husband Gary have now resided and raised their family in Wyoming for several years.