Do you know what powers the constitution delegates to the federal government?  What rules are required before you can make your government abide by these rules?

If you haven’t attended a Constitution Boot Camp yet, please consider registering for this one.   We are sending out a special invitation to students to join us–Let’s Educate the Kids**.   Learn about your constitution.    By attending you will receive the handbook for We the People, The Federalist Papers and The Citizens Rule Book. Lunch will be provided FREE by American’s for Prosperity –AFP (Thanks!).

Learn the difference between a Republic and a Democracy, Natural Law and what Federalism really is. We do more in 5 hours than most schools do in FOUR YEARS!   Fee for Class is $25.   Free $25 GameSpot gift cards will be given to—College Age and under students who Complete the Class.   Let’s educate the kids!

Boot Camp is a six-hour instructor led, workshop that outlines the key concepts and ideas of the Constitution in simple, easy-to-understand terms. Building Blocks for Liberty is the brainchild of Marines Jim Lewis and John Hindery.

In the United States Marine Corps, Jim and John spent four years defending the United States and the Constitution they took an oath to uphold and protect.  Rick Herron , our third instructor, served in the US Navy. As American citizens, they all became increasingly alarmed as they watched in astonishment the endless attacks on the liberties of Americans by an overreaching government. Determined to stop the daily barrage of misinformation, the two men decided to combine their love of history with a desire to educate the public the truth about the Constitution, and developed the unique teaching partnership now known as Building Blocks for Liberty (BBFL). 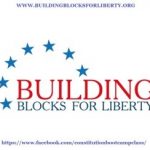