Even if it's your second time watching, join us and discuss!

Join EmpowerU At The Movies!

Registration is Full, Thank You For Your Interest! 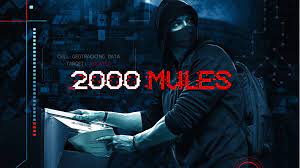 At a recent EmpowerU session we took a poll of over 100 people to find out how many of them had seen the movie 2000 Mules and how many of them wanted to see it again.   Over 60% of the people attending told us they wanted a showing to see the movie for a 2nd time!    Join us for this important movie on August 4.  Sign up for your free tickets now.

2,000 Mules is a documentary by political commenter Dinesh D’Souza. The data from the film was provided by the non-profit, True The Vote, an organization run by Catherine Engelbrecht.  The documentary  refers to “mules” as those who were paid  to illegally collect and deposit ballots into drop boxes in Arizona, Georgia, Michigan, Pennsylvania, and Wisconsin during the 2020 presidential election.

According to former President Donald Trump:  “This movie exposes the lies of the Democrats, RINO’s and Fake news who say it was the “most secure election in history.”  It was perhaps, the least secure in history.”

We encourage people from all political parties to attend:  Republicans, Democrats, Independents.   And, EmpowerU will be supplying the popcorn.  Class Starts at 6:30, we’ll talk about the movie for 30 minutes after we are done.   Please join us for summer learning.

Dinesh D’Souza has had a prominent career as a writer, scholar, and public intellectual, and has also become an award-winning filmmaker. Born in India, D’Souza came to the U.S. as an exchange student at the age of 18 and graduated Phi Beta Kappa from Dartmouth College. Called one of the “top young public-policy makers in the country,” D’Souza quickly became known as a major force in public policy through his books, speeches, and films. (D’Souza Media (dineshdsouza.com)

Catherine Engelbrecht is prominent in the news recently because of the documentary 2000 Mules, which made its international debut on May 2, 2022.  It was her organization True the Vote (founded Nov. 30, 2009) – partnering with election investigation analyst Gregg Phillips – that provided the source material for this important exposé on election fraud in the 2020 U.S. Presidential Election.  Working together since 2013, in 2021 Engelbrecht and Phillips purchased over $2 million worth of geospatial cell phone data and surveillance video footage. Prior to that they had large numbers of witness testimonies of vote fraud arriving on the TTV Hot lines. They also heard directly from whistleblowers acting as ballot mules (i.e. traffickers) in the 2020 election.